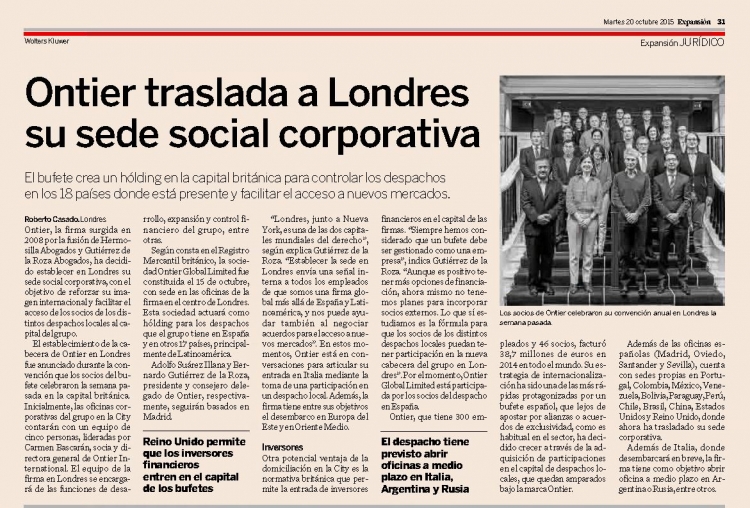 International ONTIER partners during the IV Convention in London

Spain
The Spanish newspaper Expansión, among other media, publishes today an article to announce that ONTIER is moving its corporate headquarters to London. The announcement was made official during the IV International ONTIER Convention, that took place last week in the British capital.

International law firm ONTIER is moving its corporate headquarters to the British capital, further establishing its credentials as a force to be reckoned with in the global law firm scene with 18 offices located across the Americas, Europe and Asia. From its new headquarters in London, the firm, advisor to Slim, Repsol and Talgo, among others, is poised to embark on a fresh wave of expansion towards continental Europe and the Middle East. “We are about to secure the firm's entry into the Italian market with offices in Rome and Milan and have our sights set on establishing a foothold in Eastern Europe very soon. In addition, we are currently exploring several jurisdictions in the Middle East with a view to catering to our clients' needs in this region”, underlined the firm's president, Adolfo Suárez Illana, during the fourth Annual Global Law Firm Leaders Conference in London.

Today the firm's reach extends to 13 countries. ONTIER's international expansion has been underpinned by a sector-pioneering business strategy from the outset, namely that of taking actual shareholdings in boutique law firms in the various markets. This model allows the firm to tap the expertise and know-how of local lawyers while simultaneously assisting its home-market clients with cross-border deals. All under a shared franchise and framed by identical principles and values. “ONTIER was born with global ambitions. We are an international firm, the sum of the talent of our local lawyers in more than a dozen countries, bound by a business model that is unique in the legal arena”, explains its chief executive, Bernardo Gutiérrez de la Roza.

Latin America
ONTIER, which last year billed over €35 million worldwide and has a team of more than 300 professionals globally, is already the law firm with the biggest geographic presence in Latin America: having added Chile to its reach last July, it is now present in eight Latin American countries. Moreover, the firm has an office in Miami, the nexus for cross-border transactions between the US and Latin America. “The firm remains firmly committed to consolidating its leadership in this important region to which end we are currently analysing options for penetrating the Argentine market, as well as several Central American countries”, added Suárez Illana.

Click here to read the article published by Expansion.