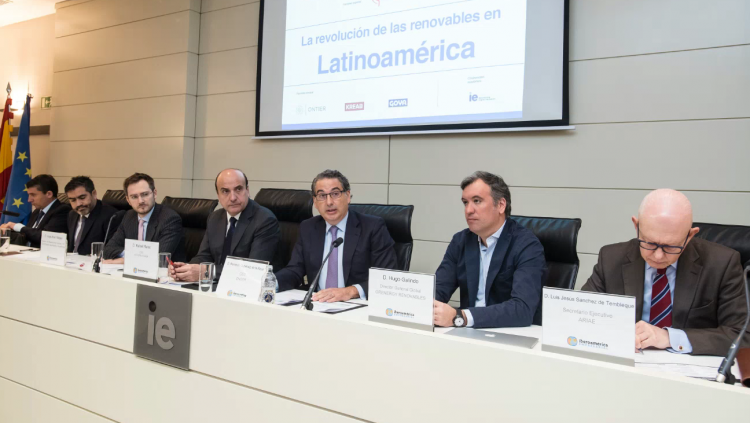 Spain
ONTIER organised a conference-talk on LatAm: the renewable energies revolution at the IE Business School.

Last week Expansion organised a conference-talk on ''LatAm: the renewable energies revolution'' at the IE Business School. The event was sponsored by ONTIER, Goya, Kreab and Acciona. The conference was led by Bernardo Gutiérrez de la Roza, ONTIER CEO. As stated by the panelists, Brazil, Mexico and Chile currently stand out globally when it comes to the renewable energies market. But actually LatAm itself could mean a third of the total renewable energies supply worldwide, since according to ARIAE's Executive Secretary Luis Jesús Sánchez de Tembleque, it's ''the world's leading area in renewable energies.''

Panelist jorge Alvar (ICEX representative) highlighted that electric power and biomass play a key role in the area currently. He added that wind energy and solar power are also on the rise. ''We are in the middle of a great time for renewable energies development. Today the costs of technology have decreased and they develop and spread quickly. Interest rates are close to 0 and institutions support us as well,'' explained Alvar. However he added that it's important to monitor legal security and technical risks. ''LatAm provides a development-friendly environment for renewable energies and through an efficient regulation investors will come to collaborate in this sector'', explained Rafael Mateo, Acciona Energía's CEO.

Mateo also stated that this renewable energies revolution was triggered by the rise of disruptive technologies, and it has already reached half the countries in the world. ''114 countries worldwide have implemented policies for renewable energies and 173 countries have set specific goals in this regard'', he said.

And how are energy projects set?

According to Mateo, in recent years energy bids have become the most popular procedure for governments to set energy projects. This has certainly translated into a decrease in the fees that LatAm has started.