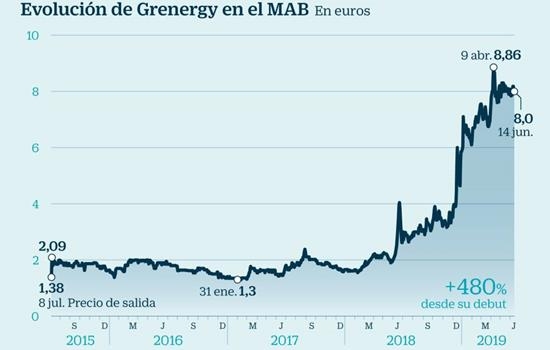 Grenergy's move to the official market started on June 17 with its incorporation brochure expected for September or October. With a capitalisation of 195 million euros, it is the second largest company in the Alternative Stock Market (MAB), only surpassed by Proeducam Group, with a 334 million euros capitalisation.

Grenergy has hired Spanish firm Ramón y Cajal, and EY will be in charge of auditing their accounts once approved by the board. The company will perform its initial offering through a listing, in which no shares of any kind will be placed.

The company, with around 600 shareholders, will start road shows as soon as possible. Grenergy will be joined by GVC Gaesco and BME at the European Spring Midcap forum taking place in Paris today and tomorrow.

The volume of free float capital required by the National Securities Market Commission (CNMV) for companies listed on the large market is 25%. Grenergy's is currently placed between 17% and 20%, but it already has a plan in place to achieve the minimum required.

When it debuted at the MAB, it had 300 megawatts under development and by now it has already built 145. The amount planned for this year is 170 but next year's forecast would reach 550 MW. Its project portfolio now stands at 2,500 megawatts, including projects under construction and projects in early stages. The purpose is doubling the number next year, as David Ruiz de Andrés stated in an interview published in CincoDías on April 10.