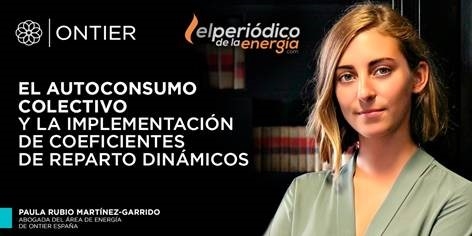 Collective self-consumption and the implementation of dynamic distribution coefficients

Paula Rubio indicates that ''with the approval of Royal Decree 244/2019, the regulatory entrenchment of self-consumption represents a paradigm shift with regards to energy production and consumption in Spain, offering the means to move from a unidirectional and centralised energy production model in large generation facilities to a scenario characterised by decarbonisation, digitisation, decentralisation of energy generation, electrification of the economy, more active participation of consumers and a more sustainable use of resources.

The lawyer also points out that ''the sharing agreement between all those subjects of collective self-consumption or consumer associated to a nearby installation through the network must contain the calculation of the net hourly energy generated individually by each of the subjects, which will be the result of multiplying the total net hourly energy produced by the sharing coefficient of the energy generated. The value that the parties involved wish to assign to this distribution coefficient may be determined according to the power to be billed by each of the participating associated consumers, the economic contribution of each of the consumers for the generation facility or any other criteria that the interested parties wish to establish, provided that there is an agreement signed by all the participants and provided that the sum of all the coefficients of all the consumers participating in the collective self-consumption is the unit.

Paula Rubio concludes that this new distribution methodology will undoubtedly result in greater concern for the private agreements between the different consumers associated with the production facilities and the criteria for calculating the distribution coefficients, giving greater importance to the legal-private sphere in the negotiation within the contractual configuration of all the private deals and agreements necessary for the implementation of a collective self-consumption structure, such as financing contracts, contracts for the provision of services for the promotion, construction, operation, maintenance and management of the associated production facilities or contracts for the purchase and sale of the energy generated.

The complete article is available here.